The last time the front-month contract in U.S. natural gas hit $3 was almost two years ago. With the ceiling broken again on Wednesday, the market seems to be bracing for more cold later this month—versus warmer forecasts issued just a week ago.

“As fickle as the weather” isn’t a saying coined without reason, and the icy blasts projected in the eastern United States from the end of next week are expected to have a significant impact going forward on natural gas storage updates provided by the government.

Starting the ball rolling is today’s from the Energy Information Administration, due at 10:30 AM ET (14:30 GMT).

And there’s a chance the build could be even lower. Take for instance the previous week to Oct. 9: the forecast injection was 55bcf while the actual number came in at 46 bcf.

If last week’s build comes in at 52 bcf as forecast, it will raise gas in storage to 3.929 trillion cubic feet—some 9.2% higher than the five-year average and 9.7% above the same week a year ago.

While the net gain in stockpiles would be bearish for gas prices over time, modest weekly rises can help the market generate and sustain a rally in the near-term—especially in the midst of an intense winter.

Wednesday’s price action showed how quickly a rally can build. 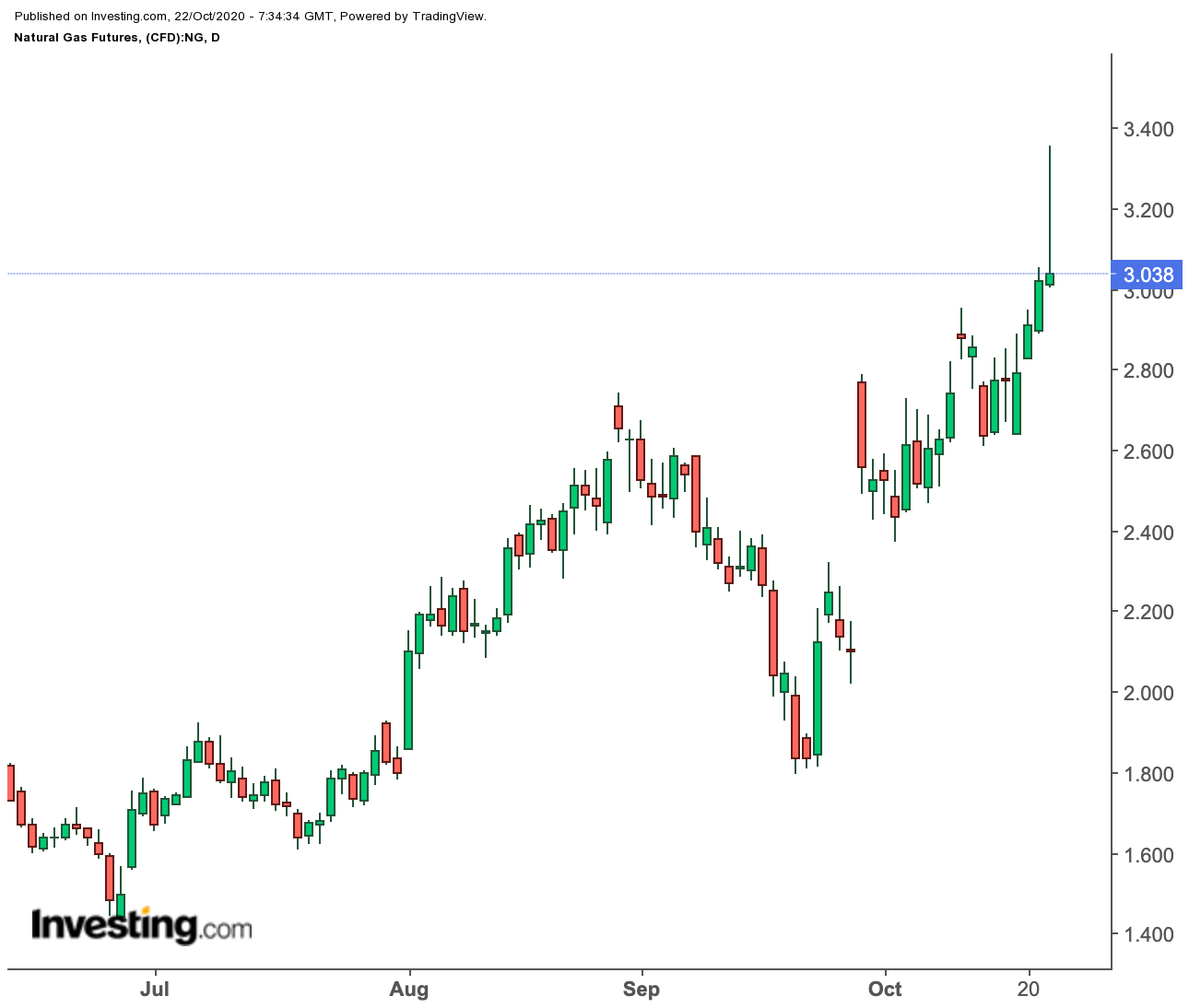 The on the New York Mercantile Exchange’s Henry Hub jumped 3.8% to settle at $3.02 per million metric British thermal units. It was the third straight day of gains in a market that has risen 9% since the Oct. 16 settlement of $2.77 per mmBtu.

In Thursday’s pre-New York session, Henry Hub’s front-month stayed above $3, though it wandered slightly into the negative.

The last time a front-month natural gas contract traded at such heightened levels was in January 2019. Along with the spot contract, natural gas for the winter months of December through March were all above $3 too.

Analysts at The Schork Group noted this week that since the summer hedge funds have “poured a lot of money” into the Henry Hub and now hold one of their most bullish positions ever, naturalgasintel.com said.

Even after Tuesday’s climb to the highest settlement since January 2019, Schork analysts believe the rally had staying power. With the November contract now taking out $3.00, “we figure that this fireworks show will last through winter,” the firm said in a note.

“An early, forceful start to winter will be necessary to support the market’s gains now that it has this jumpstart. However, the level of sustained cold weather that will be available after early November is in question.”

“There are signs that the models will try to moderate the below normal temperatures after the front few days of November.”

What exactly do these models say?

Dominick Chirichella, director of risk and energy trading at Energy Management Institute in New York, says cooler air will push across the East and South Central U.S. early in the day 2-5 period of the 15-day calendar:

“North of the front, there will be a couple opportunities for additional snow from the northern Rockies to the Upper Midwest, some of which may accumulate. Minneapolis may stay in the 30s for a day or two. This cold front will gradually work into the South Central through the Midwest for days 8-10.”

Chirichella said the GEFS, or Global Ensemble Forecast System, model shows the cold ramping up to the east faster than the ECMWF, or European Centre for Medium-Range Weather Forecasts, model.

“Eventually, the cooler air will build across the Central and Eastern US during the day 11-15 period. The GEFS remains more aggressive in bringing the cold into the Southeast than the ECMWF and the GEFS trended even cooler versus yesterday’s runs.”

The forecaster noted that the total demand for the 15-day period as a whole was not far off from what was seen on the same dates last year, “which is rather impressive.”

It said, similar to last year, the cold was strongest back in the middle of the nation, though it will spill into the eastern U.S. at the end of the month and into the opening days of November.

NatGasWeather, meanwhile, said the midday GFS data was again a little colder for next week, but trended warmer for Oct. 29-Nov. 2 by showing a little less cold air into the Midwest but still chilly over the Northeast. The forecaster said the latest model run also pointed to a more seasonal pattern for Nov. 2-4. Overall, the latest GFS gave back around five heating degree days compared to the overnight run, but maintained the chilly pattern for next week into the following weekend.

EBW, another forecaster, said Henry Hub’s December contract still had a sizable premium to November, highlighting the risk of increased volatility through expiration.

“Even beyond expiration, it is possible that the rollover gap higher will again cause market volatility, as occurred during the rollover last month when the November contract lost 37 cents in the first four trading sessions as the front-month contract.”

Disclaimer: Barani Krishnan does not have a position in the commodities or securities he writes about.

Scroll back to top